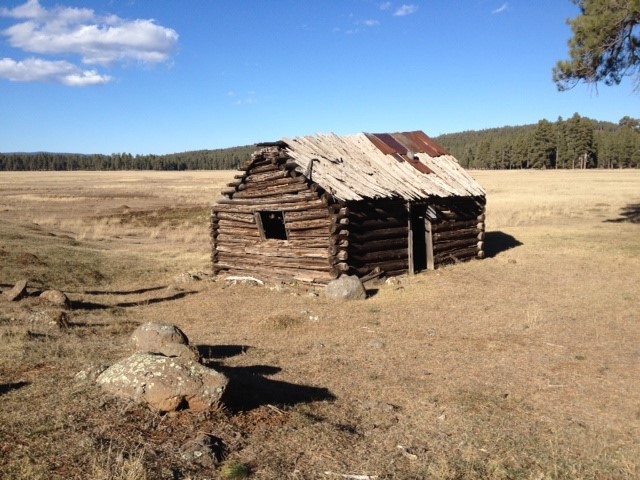 From Iowa to the Arizona Territory, the story of Brolliar and the park named after his humble cabin is iconic of American westward expansion. This project combines Brolliar’s story with that of the development of the Forest Service in this region. See two sides of the same coin – a settler and the government trying to manage settlement – on this project!

This project is especially fun because we got to work on not one, but two buildings that had very different purposes and histories despite being only 8 miles from one another.

Born in Dubuque, Iowa in 1867, David Brolliar’s early life was tumultous. As a teenager, he survived the passing of his mother and father, and went to the Arizona Territory to live with his elder sister Maria.

“The first public record of David Brolliar in Arizona is a school document from October 9, 1882….The activities and movements of David Brolliar between 1882 and 1890 are poorly documented. A family memoir recalls that he and his brother captured and tamed mustangs for the U.S. Army in Arizona during that period (Durham 1994). David honed skills as a horseman that would serve him well through life” (Stein).

As time passed. Dave used his developing skill to enter the world of horse trading, even trailing low-value horses all the way to Garden City, KS where they could sell them for $9 each. The wild west started to become tamer as the Forest Service and lawmen cracked down on potentially illegal business activities, including the buying and selling of horses from undetermined owners:

“Brolliar’s horse trading continued. In 1908 he acquired an unspecified number of horses from his sister Maria and from an individual named F. L. Frederick (Coconino County 1908; Williams News 1908)…. The animals transferred through such sales bore a dizzying array of brands, leading to occasional run-ins with the law. In 1908 Brolliar and an associate were arrested by Territorial Ranger S. C. Black for having in their possession a horse of disputed ownership. The case was heard by a judge and dismissed. Brolliar and associate then brought charges against Ranger Black for assault with a deadly weapon. That case went before a jury, with ten members voting for dismissal and two for conviction (Coconino Sun 1908). Brolliar’s eventual registration of a brand in his own name helped avoid future misunderstandings (Coconino Sun 1917a)” (Stein).

In 1910, Brolliar took advantage of updated homesteading laws and applied for a permit to patent a tract of land we now call Brolliar Park. His permit approved, he camped on the land while building his humble home, completing construction in 1911. The cabin was so humble, a visitor to his land was recorded as saying, “The next ride [from Stoneman Lake] was to my uncle’s ranch, seven miles through rocks and pines without seeing a house, except the ruins of a log cabin” (Lopeman 1914:1).

“If the Brolliar homestead was unimpressive in the summer of 1914, it soon showed unmistakable signs of progress. Dave brought 23 acres under cultivation by the close of that year, and successfully grew oats, potatoes, and barley. … By 1917 Brolliar’s herd increased to 138 cattle and his cultivated field expanded to 50 acres. He became anxious to see the fruits of his labor rewarded with a title to the land. Accordingly, he petitioned the government to let him file the “Final Proof” that would allow him to patent the property” (Stein)

His petition was challenged with bureaucratic and legal obstacles, which led Brolliar to write this exasperated letter to the officials:

Since y can not get any Results from the Land office at Pheonix y Will Rite you a Bout my homestead 384 y filed on it Dec 9 1911 as y halve complied With the Law y Would Like to halve a chance to Proove up on it if you can do any thing Please do so if not how Long are you going to keep me out of it y halve Been here Since 1910 so Please Let me no Where the trouble is.  X Dave Brolliar X [NARA var].

Brolliar’s persistence paid off, and he was permitted to prove up in 1919. He remained a bachelor for the remainder of his life, living alone in the cabin save for a ranch hand who moved in with him in his 6os. Brolliar passed at the age of 71 in 1938.

The ranch and its cabin changed hands repeatedly over the course of the next several years, and was ultimately purchased by the Forest Service in 1975. Haines writes,

“The old Brolliar homestead remains part of the Coconino National Forest today. Its century-old log cabin has not been used for many decades except by casual day visitors and wildlife watchers. The building has a roof and four walls but is uninhabitable. Only rough openings remain where windows and a door once were. The barn is gone, the well is infilled, the shed and corral lie in ruins, and there is no trace of the box house built by Brolliar in the 1910s. The proposed preservation of the log cabin will begin to arrest further deterioration and may be a first step in returning the lonely cabin on the Coconino to more active use” (Stein).

The Coconino National Forest has invited volunteers to come back and continue rehabilitating this historic guard station. In 2018, volunteer crews installed a new roof and replaced deteriorated siding on the building (see the transformation in the photos to the right!). We’re excited to return!

Mormon Lake, Arizona: the sometimes-largest natural lake in the state. Its water level rises and falls with the seasons, sometimes becoming deep enough to boat in and other times drying up almost entirely. For most of the year though, it exists as a riparian marsh, a unique environment in this part of the country. Volunteers will be treated to a special camping spot that is not open to the general public and offered great views of the lake and surrounding landscape.

For over 100 years, the Mormon Lake Guard Station Residence Building served the US Forest Service in managing the pine dominated plateau country surrounding the shallow, periodically dry, basin of Mormon Lake. Constructed as early as 1908 and named, without flair, as the Mormon Lake Ranger Station, the building served for decades as both a ranger station and modest residence for rangers and their families. Operating out if this building, rangers managed timber sales, grazing permits, homestead entries, and strategized the suppression of wildfires.

By the 1970s, the a new modern Ranger Station building was constructed closer to Flagstaff, and old station grounds were repurposed as the Mormon Lake Guard Station. This guard station functioned as a staging area compound for wildland fire-fighters, and the old residence building was used to house seasonal crew members, including the fledgling Mormon Lake Hotshot crew.

Over time, the Ranger Residence building, was referred to by the fire crews as the ‘Cook Shack’ and was used as a communal location for crews to convene and prepare meals. A new modular crew building was constructed nearby in 2002, and the Ranger Residence fell into disrepair. As it once served as home to hundreds of wildland firefighters and forest service employees, this place still holds a strong connection to many people who live and work in the area and on the Coconino National Forest. It is hoped that the repair and preservation work on the building will eventually lead to its inclusion into the ‘Rooms with a View’ Arizona Cabin Rental Program sponsored by the US Forest Service.  This program offers historic buildings to the public for daily/nightly rental. 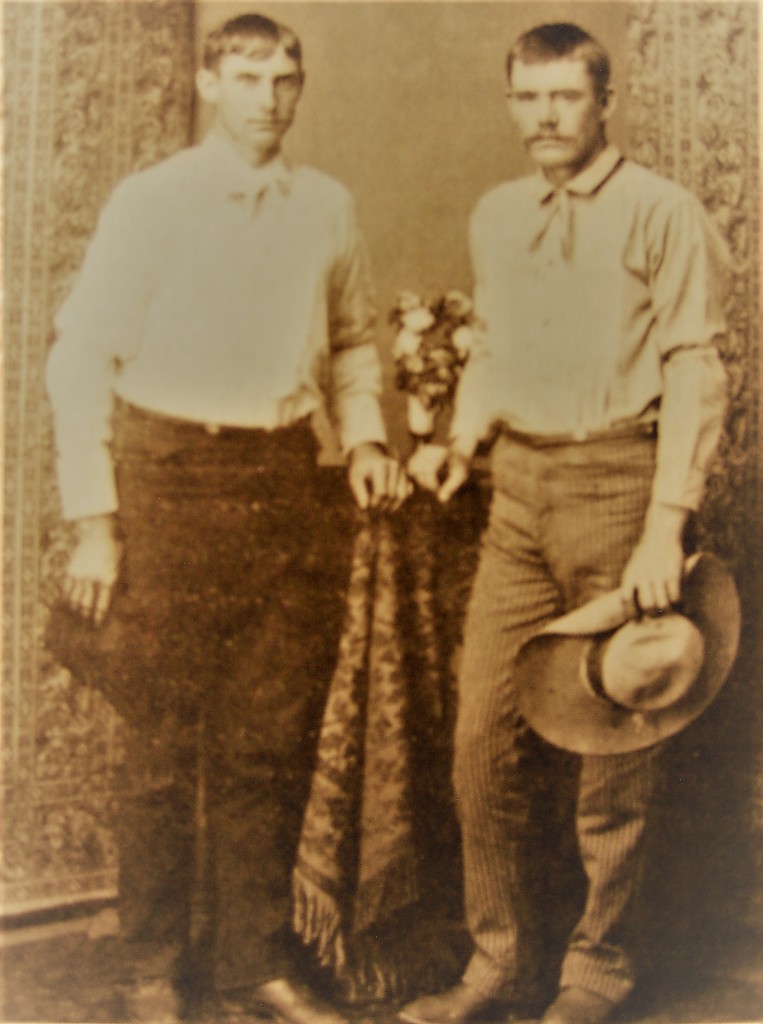 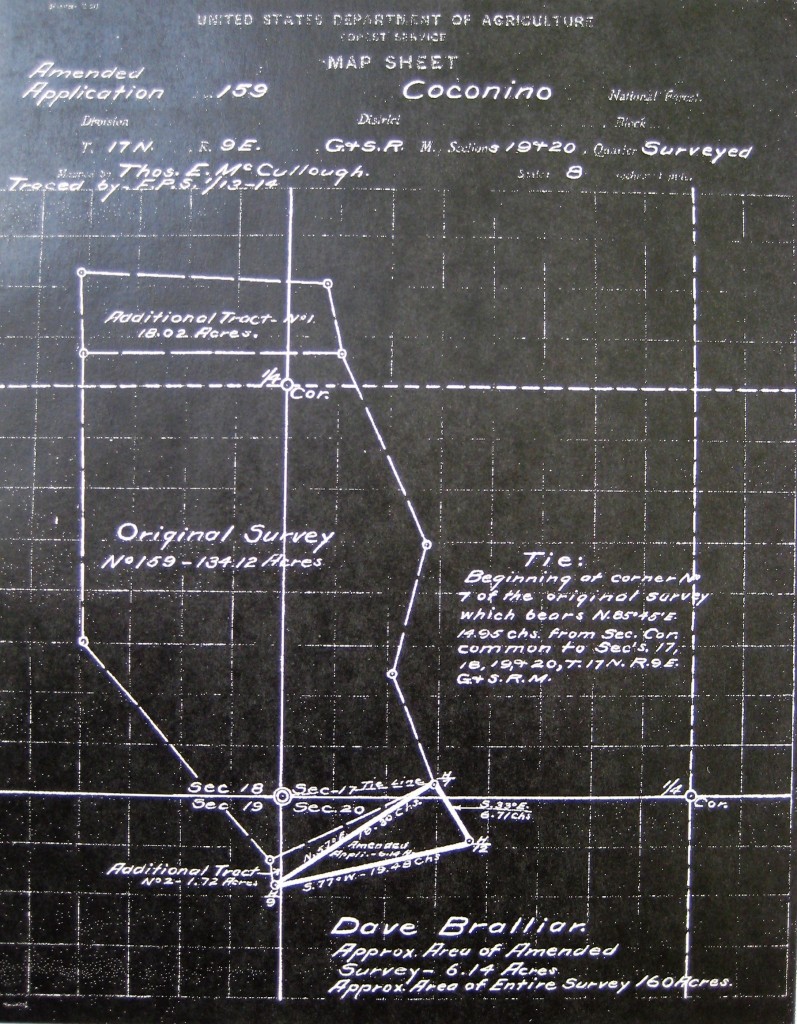 “USDA Forest Service metes and bounds survey of 1914, showing original acreage claimed (134.12), additional tracts north and south of that tract, and a later, amended tract at the very southern end of the homestead (NARA var)” (Stein) 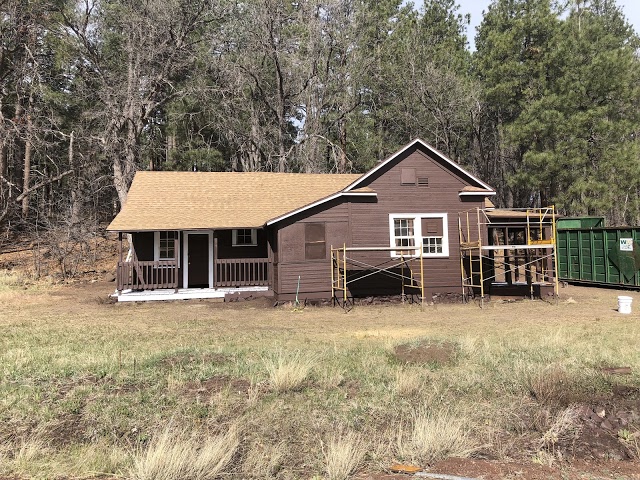 Mormon Lake Guard Station, near completion of the 2018 project work 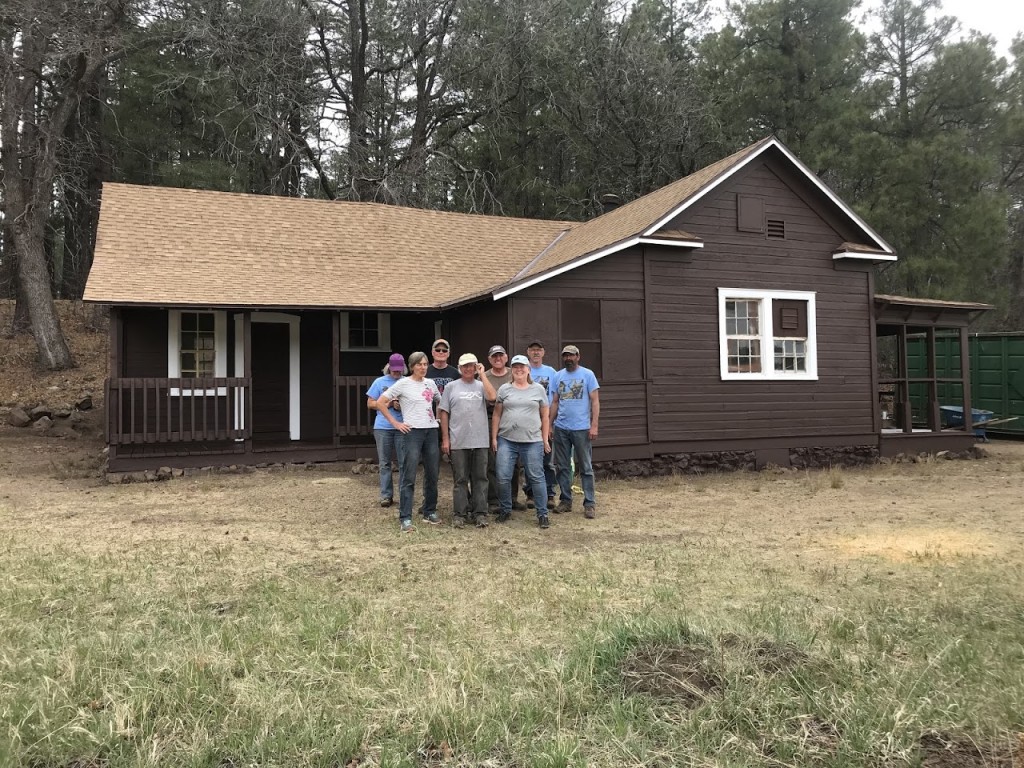 A proud (and maybe just a bit tired!) volunteer crew at the end of the 2018 Mormon Lake Guard Station project work. 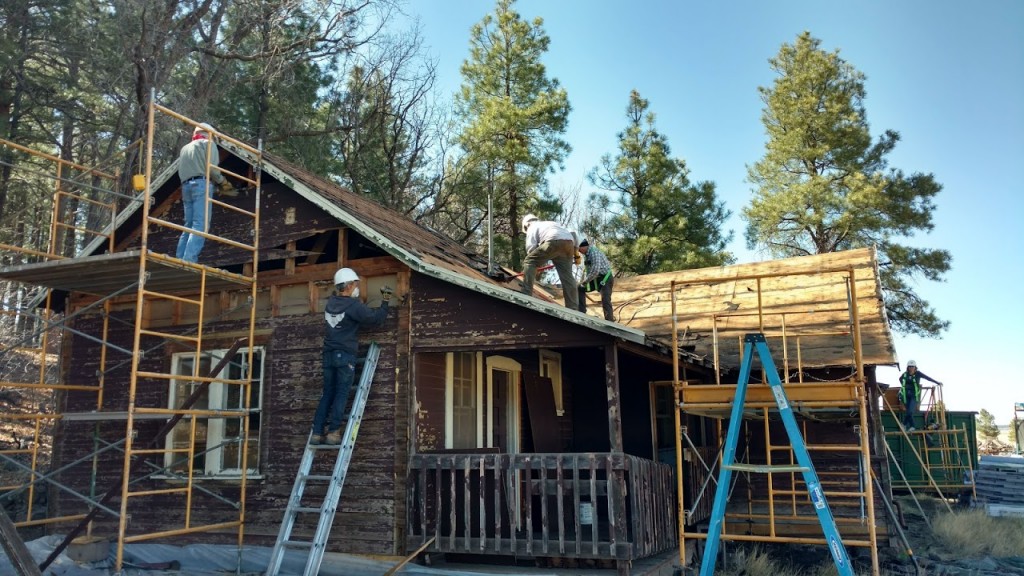 Mormon Lake Guard Station, at the beginning of the 2018 project work. What a difference this project’s volunteer crews made!