Never heard of Neosho, MO before?  After this summer, we hope you’ll remember the name.  Neosho is located in the southwest portion of Missouri, just half an hour south of Joplin, and about the same distance from the tri-state marker of Missouri, Kansas and Oklahoma.  More often than not, Neosho is a little town that most people probably don’t get the chance to even drive through.  But Neosho lays claim to not only the oldest National Fish Hatchery in the US, but it is also known as the Gateway to the Ozarks and Flower Box City.  Besides that?  Neosho is home to the George Washington Carver Schoolhouse.  And that is why HistoriCorps volunteers know the city. 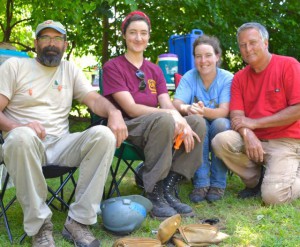 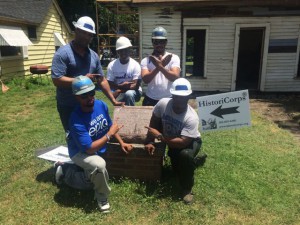 Beginning on June 15 and broken into three sessions that ended on July 1, the Neosho Schoolhouse project attracted nonstop media attention. Volunteers came from the local community and as far away as New Jersey, Illinois, Florida and Nebraska.  The task for the project?  To restore the building to its original condition, as scientist George Washington Carver would have known it when he went to school there back in 1876.  That meant ripping off current siding and restoring the old, getting rid of modern additions to the house like the porch overhang and the concrete patio, painting, caulking and stabilizing the structure.

Volunteers learned a lot on the project, and got to meet some historians, archaeologists, Carver Birthplace Foundation board members, and Parks Department representatives, who each lent a hand in the restoration project.  The site even saw fraternity brothers from Phi Beta Sigma, Carter’s own fraternity, who came to talk some history and set to work in Carter’s honor.  Friendships were formed, and project leaders John and Charlotte kept the crew happy and upbeat despite the intense heat.  Although each volunteer crew member had a different reason for wanting to participate in the project, they each found ways to get along and form perfect working teams that got even more of the job done than was originally planned!

Volunteer Barbara Mullally writes, “I wanted to play a part in the restoration of the historic school because I attended a one-room school and because I was a teacher. This was the perfect project for me. We accomplished so much and gave the school a great start on its next 140 years.”  What better way to give back to your profession than by restoring a part of its history?

Plenty of fun was had by all, and as at any HistoriCorps project, it’s “the people. It’s always the people!” says Melissa Simon, that make the work that much more meaningful and exciting.  Charles Hoehn commented, “I haven’t work this hard, sweated this much and had so much fun in many years.  John and Charlotte were great at helping us laugh at our mistakes and making a hot dirty job a lot of fun.  I’m sure Charlotte will some day run a small country and when she does it will be a loss to HistoriCorps.” Yep, we have some great volunteers, but great employees, too. 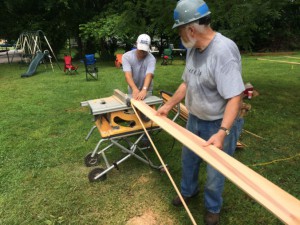 It was the bonds formed on the job site that stood out to Dave Ciaccio as well, who appreciated “the team work effort.  I enjoyed watching John Bales do his craft and liked seeing the satisfaction that the Neosho Parks Department volunteers gained from helping our crew. Our project made for them a special day of ‘doing something different’.”

Cheryl Hiipakka “The heat and humidity were intense, but I loved how we all rallied together with good humor.  I enjoyed meeting the people — HistoriCorps team and volunteers, and all the local townspeople who were so appreciative of us working on the School House.  Besides that, I am so glad we got to work with John, Charlotte and Maggie (HistoriCorps Institute student volunteer) – They are the “Gold Standard.” I think they would be hard to beat as leaders.”

Kim Mailes, a Neosho native who volunteered on the project for all three sessions, kept a blog of every day of the project.  Through his efforts, new volunteers can know exactly what happens on a daily basis on a project.  He ends his three weeks of blogging by commending his fellow volunteers: “This is the spirit that has sustained the 1872 Carver Schoolhouse Project from its beginnings in 2004: regular people working toward a common goal; volunteers seeking no gain or glory; history’s debt paid by today’s reverent remembrance.  It’s remarkable what can be accomplished when an individual cultivates an awareness of what needs done, then does it, without regard for who gets the credit.”  Check out his blog to see the progress from day one.

All of our projects are different, but each one gives you the opportunity to explore, learn, engage, and connect.  So get out there and start restoring!