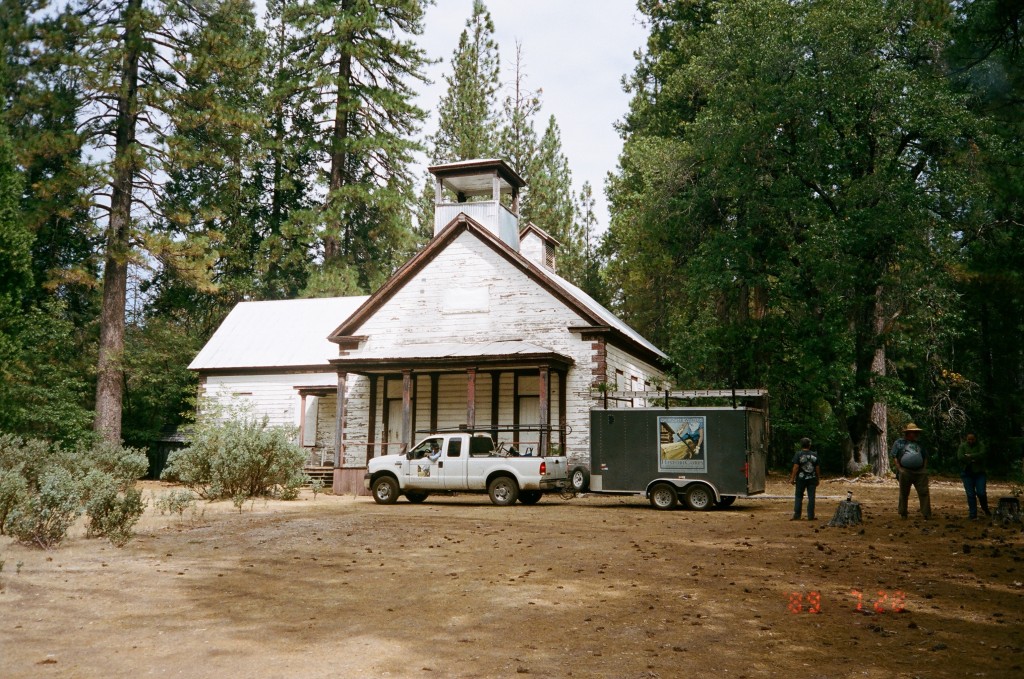 Replete with stunning geologic features, this area gave rise to the world’s largest hydraulic mining operations, which proved to be more destructive – and more profitable – than any mine ever built before. Once an incredible example of man’s ability to affect the environment, this site is today a State Historic Park that offers clean air and beautiful scenery.

LOCATION:  Only 26 miles from Nevada City, CA, drivers will be inspired by the scenery and history held in the hilly roads leading to the park. We camped inside the park at Chute Hill Campground.

HistoriCorps volunteers adventured to North Bloomfield in 2018 to begin restoration work on the town’s signature schoolhouse. When we heard we were invited back to continue our great work in 2019, we couldn’t wait to share the good news with our volunteers! Read below to find out why this state park is particularly special:

“In 1851, three gold prospectors discovered a rich gravel deposit in a nearby stream. In need of supplies, one of the miners was sent to town with instructions not to divulge their location. After imbibing at a local saloon, he boasted of a great find and upon returning from Nevada City, was secretly followed by nearly 100 prospectors. Despite their efforts, they did not find their fortunes and left the area calling the creek a ‘Humbug.’ A few miners stayed and called the new mining camp ‘Humbug City.’

“Other miners came into the area in 1852 and 1853:  This second wave of miners employed newly created hydraulic methods and found gold in sufficient quantities to justify settling and expanding the camp into a full-fledged townsite.

“By 1855, Humbug City resembled a small town with its first hotel, the Hotel de France. With over 400 residents, the town became known as North Bloomfield, California in 1857 when the post office was established. Humbug was a name given to “played-out” creeks and mining claims everywhere during the gold rush. The name was so common during this period that the post office required that the name be changed!

“…North Bloomfield experienced its heyday from the late 1860’s to 1884, with nearly 1,500 inhabitants and more than 200 buildings serving as a supply base for the township.  These buildings included 5 hotels, 8 saloons, 2 livery stables, 2 dry goods stores, 2 breweries, 3 boot makers, 3 fraternal organizations, a school, a barbershop, a drug store, a butcher, a baker, a dairy, and 2 churches.

“…In 1884, the Sawyer Decision was handed down to curtail the wanton disposal of hydraulic mining debris into waterways. Hydraulic mining continued for many years but at only a fraction of the scale. Companies had invested millions of dollars into the hydraulic gold mining effort in California. These companies slowly folded and the miners and their families moved away to seek work elsewhere. North Bloomfield and the many towns born of hydraulic gold mining in the California gold fields slowly died.” Read more here.

Today, North Bloomfield serves as a site of historic interpretation, drawing those interested in the cultural and economic center it once was. Many buildings from North Bloomfield’s heyday line the streets, and visitors can even see hydraulic mining equipment. Tours are given daily. The community is kept alive by residents of some of the historic homes. Click the “plus” sign below to read more about the destructive force of the hydraulic monitors. 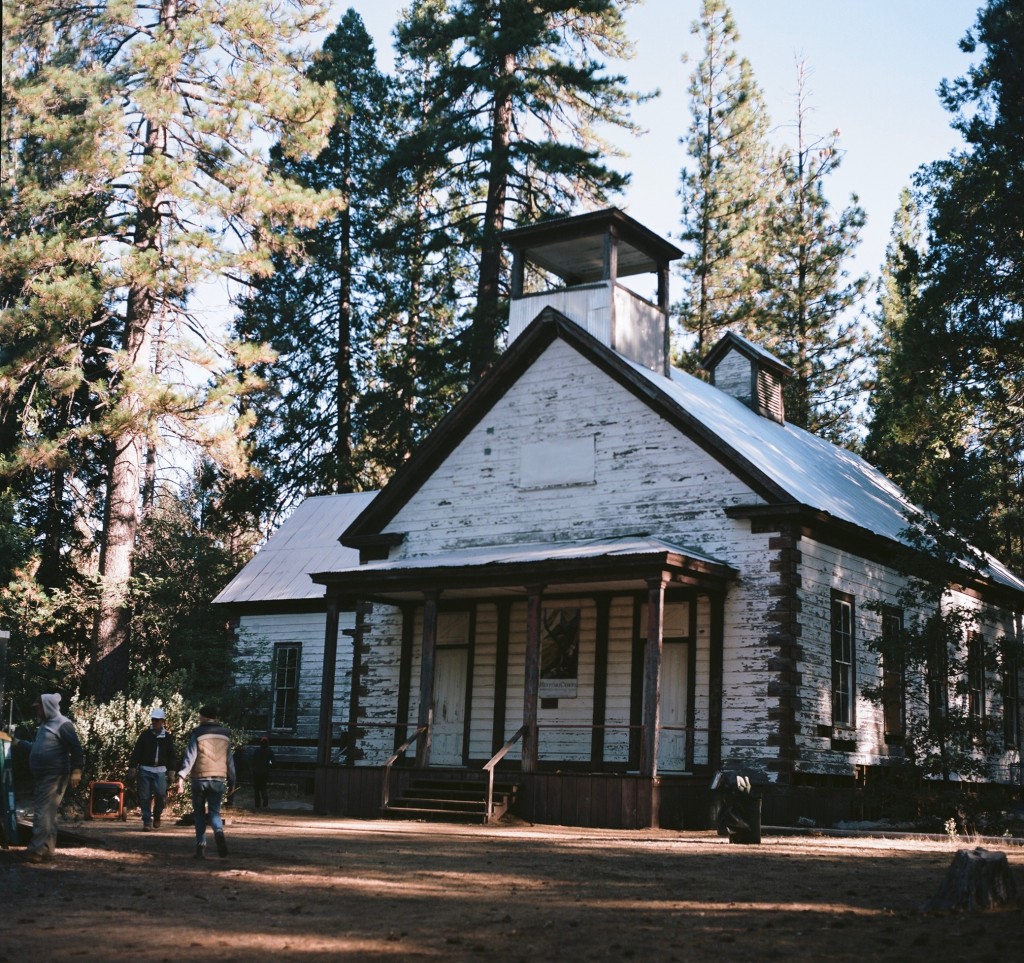 “The destructive forces of the 1850’s Gold Rush reveal a man-made landscape that beckons visitors to adventure.” – Friends of Malakoff Diggins 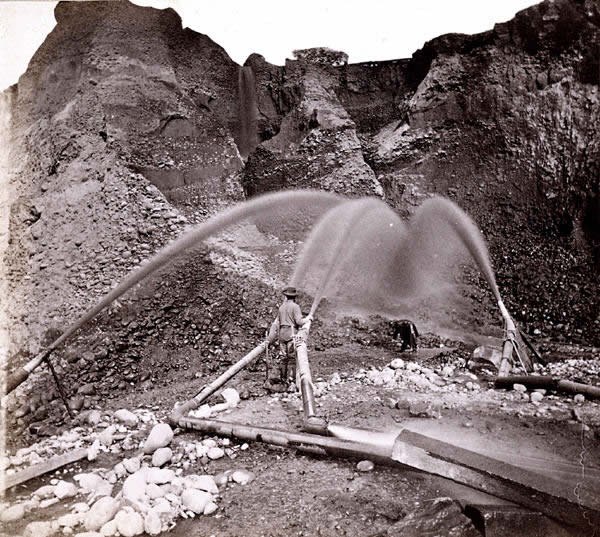 Hydraulic mining made North Bloomfield one of the most productive mining sites in history. The destruction these water cannons caused inspired the first piece of environmental protection legislation. Photo Credit: Sierra College

Our rustic campsite in Malakoff-Diggins SHP will be a great home to return to at the end of the day!

A Sierra College article shares the following: “The Monitors were powerful to say the least. When the water reached the Monitor it was compressed into a nozzle that was anywhere from one inch to eight inches in diameter. The stream of water that could wash down whole hillsides was impressive to behold. In his multi-volume 1874 – 1890 classic History of California, the historian Hubert Howe Bancroft stated that an eight-inch Monitor could throw 185,000 cubic feet of water in an hour with a velocity of 150 feet per second. Other accounts of the force are less technical but just as startling. One description points out that a strong man could not swing a crowbar through a six-inch Monitor stream, yet another commented on the striking phenomenon of a fifty-pound boulder riding the crest of a jet with the power of a cannonball. Documented evidence recalls that men were killed by the force of the water from 200 feet away.

“The Monitors operated twenty-fours a day with the mines illuminated by high-intensity lighting or locomotive headlights. The amount of water needed was enormous. At the North Bloomfield mine, sixty million gallons of water were used daily. Thomas Bell, the president of the company, estimated in 1876 that the hydraulic mine would consume 16 billion gallons of water in that year alone.

“The debris created was equally enormous. North Bloomfield, a mine about 1 1/8 mile long and 350 – 550 feet deep excavated 41 million cubic yards of material between 1866 and 1884. In 1891, a group of government engineers estimated that hydraulic mining had deposited 210,746,100 cubic yards of debris along the basins of three rivers alone — the Yuba, American, and Bear.” Keep reading here.

AREA TOURISM: Malakoff Diggins State Park is a tourism destination in its own right, with more than 20 miles of trails, gold panning on Saturdays, interpretive tours, and beautiful scenery. Volunteers may enjoy swimming and fishing at a nearby lake.

Only 90 minutes from the jobsite is famed Truckee, CA, a gateway community to the summer & winter playground of Lake Tahoe!

Volunteers worked alongside expert field staff to learn the skills necessary to preserve this historic, not to mention pretty, schoolhouse.

If we complete the above scope of work, we will focus on these task items: