LOCATION:  We camped at North Chief Hosa campground, about 20 miles west of Denver into the foothills, and commuted to the day’s project site.

HistoriCorps does not charge for its volunteering projects. The majority of project costs are covered by our project partners and grants, but as a 501c3 nonprofit organization, HistoriCorps relies on donations to continue engaging volunteers to save significant historical sites across America for generations to come. Your donation of any amount will make an incredible difference! Increase your impact – make a generous gift today.

Our first round of preservation work concluded in summer of 2018 (you can see the incredible transformation in the above photo), and we’ve got a great scope of work to accomplish this spring.

For more than 100 years, Denver’s Mountain Parks have made the city’s park system one of the most unique in the country, offering a place for people to play in the mountains. Extending across four counties outside of Denver city limits, 22 accessible parks and 24 conservation areas make up 14,000 acres of one of the most expansive park systems in the west.

O’Fallon Park is shaped by a gentle bend in Bear Creek. The creek and park is a favorite for anglers and hikers, and the grassy open areas contained by the park beckon families on weekend picnics. The land for the park was donated to the City & County of Denver in 1938 and became one of the last to be acquired by Denver Mountain Parks. This 850-acre park in Bear Creek Canyon was donated by Martin J. O’Fallon for “the use and pleasure of the people.” The unusual quadrangle chimney HistoriCorps worked on bears a plaque with Martin’s wishes inscribed on it. 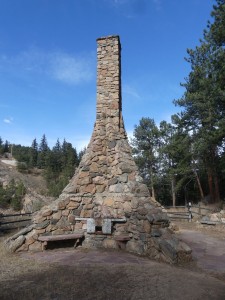 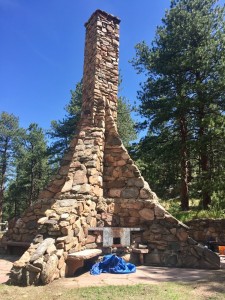 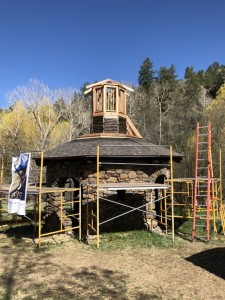 Little Park, another treasured natural resource for the region, boasts an impressive stone wellhouse. The signature cupola was at one point removed by the Civilian Conservation Corps, but, happily, was restored by HistoriCorps volunteers in 2018.

Whereas O’Fallon Park was one of the last to be acquired, Little Park was the first, having been acquired in 1917. According to Denver Mountain Parks,

The 400 acres of Little Park, acquired in 1917, comprise the first mountain park encountered along the Bear Creek road west of Idledale. To the east of Little Park is Mount Falcon Park and to its west is Lair o’ the Bear Park, both owned and managed by Jefferson County Open Space. With its low meadows immediately adjacent to Bear Creek and its unique octagonal-roofed well house built in 1919, Little Park continues to offer a secluded serene spot for a day by the creek. South of Bear Creek, Little Park is characterized by steep canyons and ridges covered with Ponderosa Pine and Douglas-fir forests, open shrublands, and prominent rock outcrops.

This landscape is highly valued for its natural resources that continue into Mount Falcon Park to the south and east, designated as a natural area by Jefferson County Open Space. This value is also recognized by the Colorado Natural Heritage Program (CNHP), which designated this area as a Potential Conservation Area for ponderosa pine and scrub woodland communities, located primarily on the upper slopes of the park. To help protect this sensitive landscape, no public access is provided across Bear Creek to the steep southern portions of the park.

Little Park serves as the first trailhead on the Bear Creek Trail which connects Lair of the Bear, Corwina, O’Fallon. And Pence Parks. Bear Creek is open to hiking and mountain bikes.

Volunteers worked alongside expert field staff to learn the following skills. By completing this scope of work, both structures will be effectively preserved and can continue to contribute to the cultural landscape of Denver’s Mountain Parks.