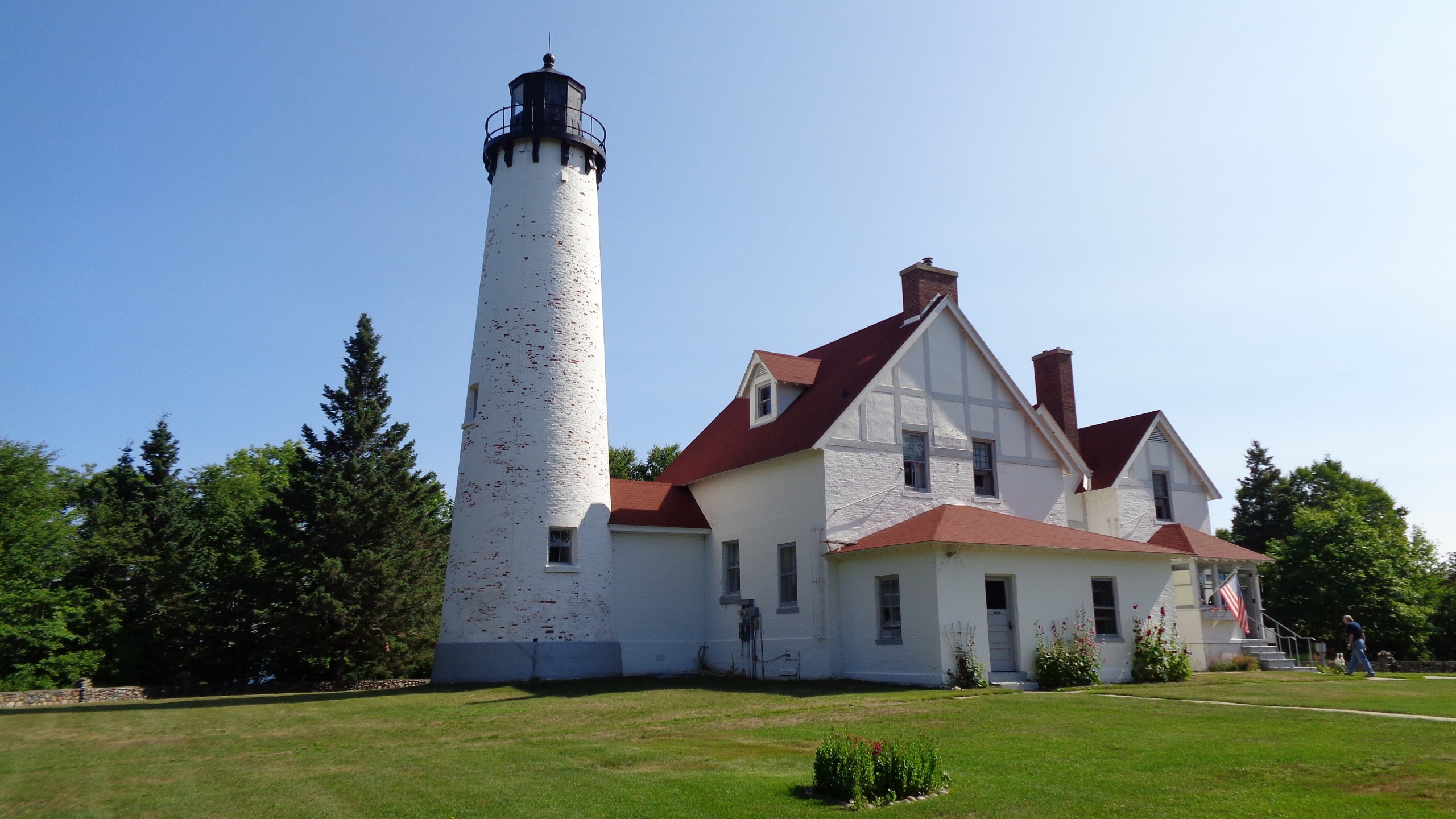 Lighthouses and their light-keepers are celebrated in naval history. Because Point Iroquois is strategically located at the mouth of a river that drains into Lake Superior, it has been occupied for generations going back hundreds of years. The dramatic red brick lighthouse and its keepers’ residence are due for some Historiorps TLC!

French explorers/colonizers began occupying the area in 1620. In 1622, there was a notable battle between the Ojibwe and Iroquois for control of the point, which the Iroquois lost. Referencing this battle, the Algonkian name for the point, “Nadouenigoning,” is a portmanteau of the words “Nadone” (Iroquois) and “Akron” (bone). Two hundred years later, in the mid-1800s, copper and iron ore were discovered here, which secured the point’s fate as a strategically important place.

On September 20, 1857, two years after a wooden lighthouse and keepers’ residence were constructed, a guiding light shone over the channel for the irst time. This first light illuminated the watery highway for 107 years, during which time the original wood buildings were replaced with brick constructs. It is estimated that this channel, running up St. Mary’s River and connecting goods that traversed the frigid Lake Superior to the hub of Sault Ste. Marie, was at one point the busiest in the world. However, time and technology march on, and by the 1960s this beacon was replaced by an automatic light, stationed nearby at Gros Cap in Ontario. The Point Iroquois Lighthouse, by now an anachronism, earned its place in history and was placed on the National Register of Historic Places in 1975.

Join HistoriCorps on this unique project, and don’t forget your sun hat and swimsuit!

Please plan to arrive at our campsite no earlier than 6pm and no later than 8pm on the first day of your session.

Tent camping only; those with truck bed campers or similar can also access this site. There are RV sites in the vicinity at Monocle Lake Campground and Brimley State Park Campground but volunteers will need to make their own reservations, and plan to commute to and from the site daily.

This large residence has stood for decades against the harsh winters of the Upper Peninsula.

HistoriCorps is committed to educating and training volunteers in preservation skills, with an overarching mission of inspiring a preservation ethic in all those involved. Learning and working alongside expert HistoriCorps field staff, volunteers and youth conservation corps members (across different work sessions) will learn the traditional skills necessary to preserve and restore elements of the Point Iroquois Lighthouse. We will focus on executing exterior stucco repairs, removing the existing latex paint coating, and repointing/replacing deteriorated mortar and bricks to the Keepers Quarters and Lighthouse Tower. Volunteers should plan to work on scaffolding or a boom lift as necessary.