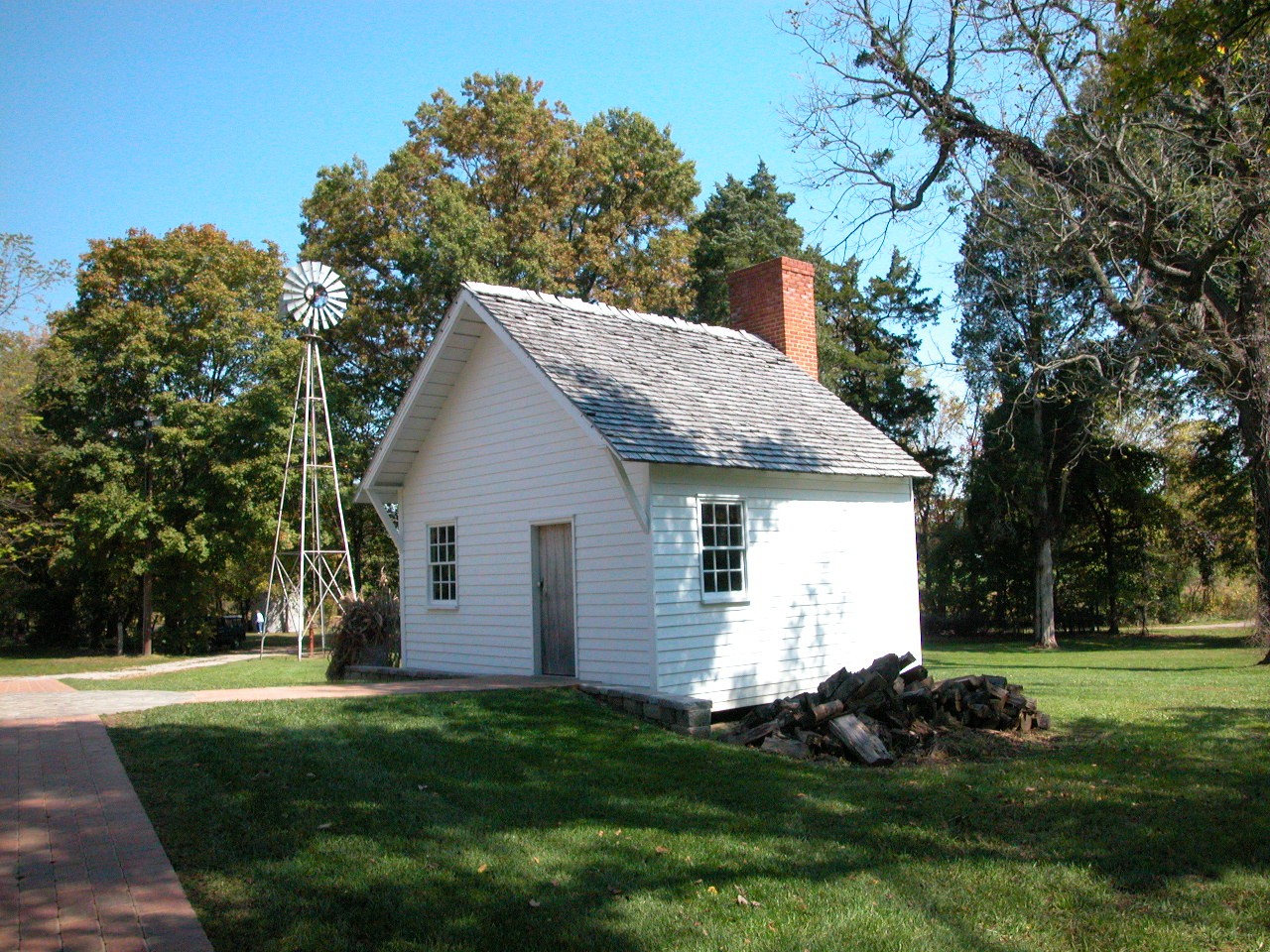 Some think of the Ohio River Valley as being “the first American West.” Join us on the banks of the Ohio to experience the area that built and connected great nations many centuries before European explorers came, and even today serves as a major trade route. 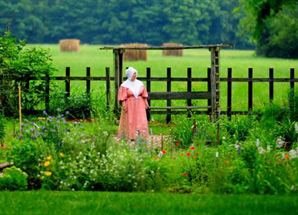 A period actor in the Landing’s still-maintained kitchen garden.

LOCATION:  A bucolic setting near Louisville, KY, Riverside is situated on 300 beautiful acres on the banks of the Ohio River.

On his travels in the late 1660s, French explorer La Salle called the Ohio “la belle rivière” or “the beautiful river,” and a century later, Thomas Jefferson wrote, “The Ohio is the most beautiful river on earth. Its current gentle, waters clear, and bosom smooth and unbroken by rocks and rapids, a single instance only excepted.” (That “single instance” is now a stupendous landmark called Falls of the Ohio National Wildlife Conservation Area.)

Lovers of early American exploration history will find incredible stories here. The Ohio helped shape great civilizations for hundreds if not thousands of years. One striking piece of evidence of these cultures can be seen in numerous intricate and simple mounds (like Angel Mounds just across the Indiana border). In more modern history, the river, which runs northeast up to Pennsylvania, witnessed the escape of enslaved peoples at its narrow crossing points. Today, barges and recreational boaters share the river, and summertime festivals and concerts in small towns and cities along the river are something locals and visitors alike look forward to!

Our project focused on preserving an historic kitchen on the grand grounds of the Riverside-Farnsley-Moreman Landing. From our project partner’s website:

“[The Landing] exists to promote, preserve, restore and interpret historic farm life on the Ohio River. Standing atop a gentle rise overlooking the Ohio River, the Farnsley-Moremen House is the centerpiece of a 300-acre historic site in Louisville, Kentucky, called Riverside, the Farnsley-Moremen Landing. Built circa 1837, the house stands as a testament to the important role agriculture along the river played in the development of our country.

“Two upper middle class farm families, the Farnsleys and, later, the Moremens, brought the Riverside property to life by cultivating the fields and trading on the river. In the 19th century, the Ohio River served as one of America’s superhighways and the families who lived at Riverside took advantage of their location. From around 1820 until 1890, an active riverboat landing on this property allowed people traveling by river to stop to trade goods, to take on boilerwood for fuel, or to rest. In addition, a ferry operated out of Riverside carrying people and goods back and forth between Indiana and Kentucky. Gabriel Farnsley built the impressive two-story brick “I” house with its full-height Greek Revival portico by 1837. Farnsley had purchased the 200 acres, upon which the house is built, with a business partner in 1826. By 1828, Farnsley bought out his business partner to become the sole owner of the property. Farnsley prospered at his Ohio River farm located 13 miles downriver from Louisville. By 1849, the year of his death, Farnsley had increased his land holdings to 400 acres.

“Alanson and Rachel Moremen purchased the original 200-acre tract in 1862. They acquired additional surrounding properties bringing the size of the farm to 1,500 acres, the largest farm in Jefferson County, Kentucky, at the time. By the 1880s, the aging Alanson began legally dividing the farm among his heirs. Moremen family descendants owned the property until 1988 when they sold the house and remaining acreage to Jefferson County.”

Continue learning about the history of the Landing here.

“Today, visitors to Riverside, the Farnsley-Moremen Landing can tour the historic house and grounds which include:

Volunteers will enjoy onsite camping and gorgeous views of a Kentucky summer estate while helping fix up the roof of the small kitchen mentioned above. 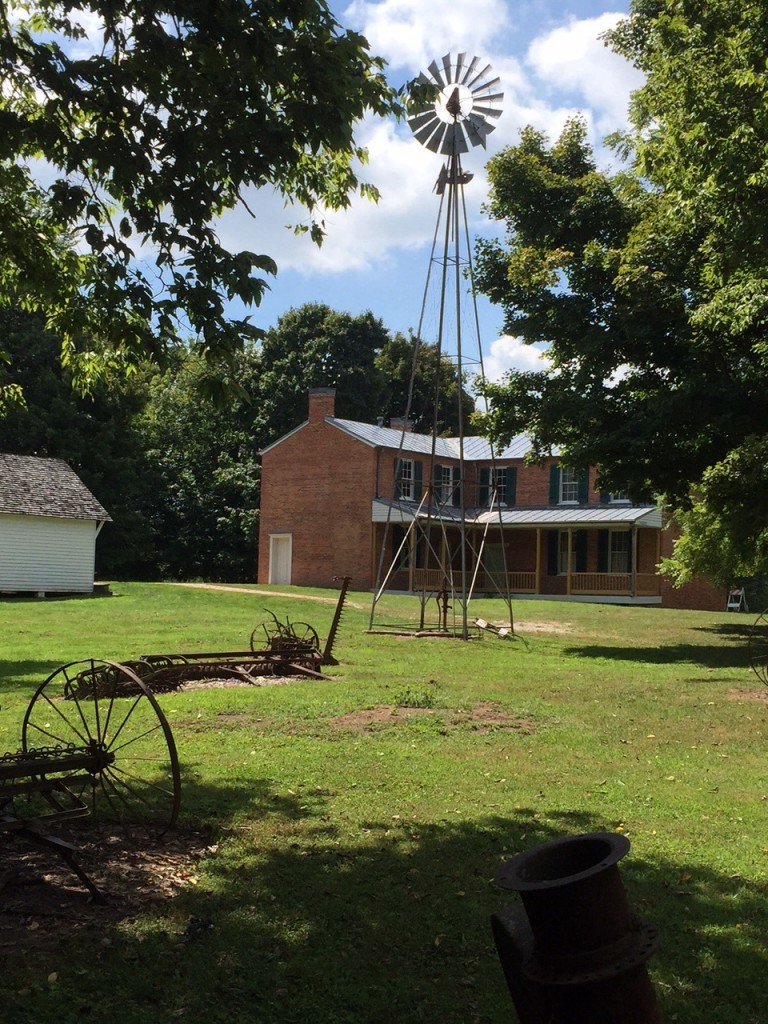 The Landing’s peaceful, even bucolic, grounds today share the story of one slice of American history. The kitchen, once staffed by enslaved African Americans, is just to the back of the main house – imagine the incredible labor, creating and carrying hot meals up to the house day in and day out.

Volunteers worked alongside expert field staff to learn the skills necessary to undertake and accomplish this excellent preservation project.